The revival of the ‘big four’ in international student mobility

Blogs The revival of the ‘big four’ in international student mobility

The international student mobility landscape has been vastly impacted by increasing diversity in the market. As colleagues Laura Hilger and Christabel Downing noted in their recent blog for EAIE, the big players are now not only looking ahead towards increased growth, but cautiously over their shoulder as the new kids on the block creep into their market share. In reality, international student enrolment amongst non-OECD (Organisation for Economic Cooperation and Development) countries has been growing steadily since the start of the millennium. In the last 20 years, the number of international students studying in non-OECD countries has risen by 6%, a trend that in the long term is likely to continue. Right now, however, a combination of factors has ideally placed ‘the big four’ of the US, UK, Australia, and Canada, for a post-pandemic resurgence.

A battle for the ages

Historically, external factors have meant that each of the ‘big four’ countries in terms of total numbers of international student enrolments, have been unable to operate from positions of strength, at the same time. This is perhaps best understood in three distinct periods. The first wave of international student mobility, from 2001-2009, resulted from 9/11 terrorist attacks. As trust in studying in the US faltered amongst the international student community, the US continued to lose market share throughout the 00’s to its three main competitors.

The second wave, from 2009- 2015 was defined by a range of factors.  The 2008 recession prompted greater proactivity amongst US universities to recruit international students, whilst strict visa restrictions in Australia from 2009-2012 stagnated growth, before more liberal changes from 2013 prompted a revival. Meanwhile the UK suffered as a result of removal of the post study work visa in 2012, and Canada grew significantly as a result of its 2011 Economic Action Plan.

The third wave, from 2015-2020, was largely shaped by two elements: The Trump Presidency, and Brexit. Anti-immigrant rhetoric both in the US and UK produced significant barriers for universities in attracting global talent, which again resulted in increased growth for Australia and Canada.

To summarise, over the past two decades, each of the ‘big four’ have gained or lost market share of international student enrolments as a result of fluctuating external events. However, now for the first time in over two decades, conditions appear stable for substantial gains across the four countries.

It seems slightly odd to talk about stability in the age of Covid. Over the last year the financial implications of the freeze on international student mobility across the US, UK, Australia, and Canada have been well documented. As we begin to peek optimistically towards a return to students on campuses, the combination of favourable visa reforms, new government priorities and a desperate need to recover what has been lost, could result in the ’big four’ adopting aggressive growth strategies over the coming year. 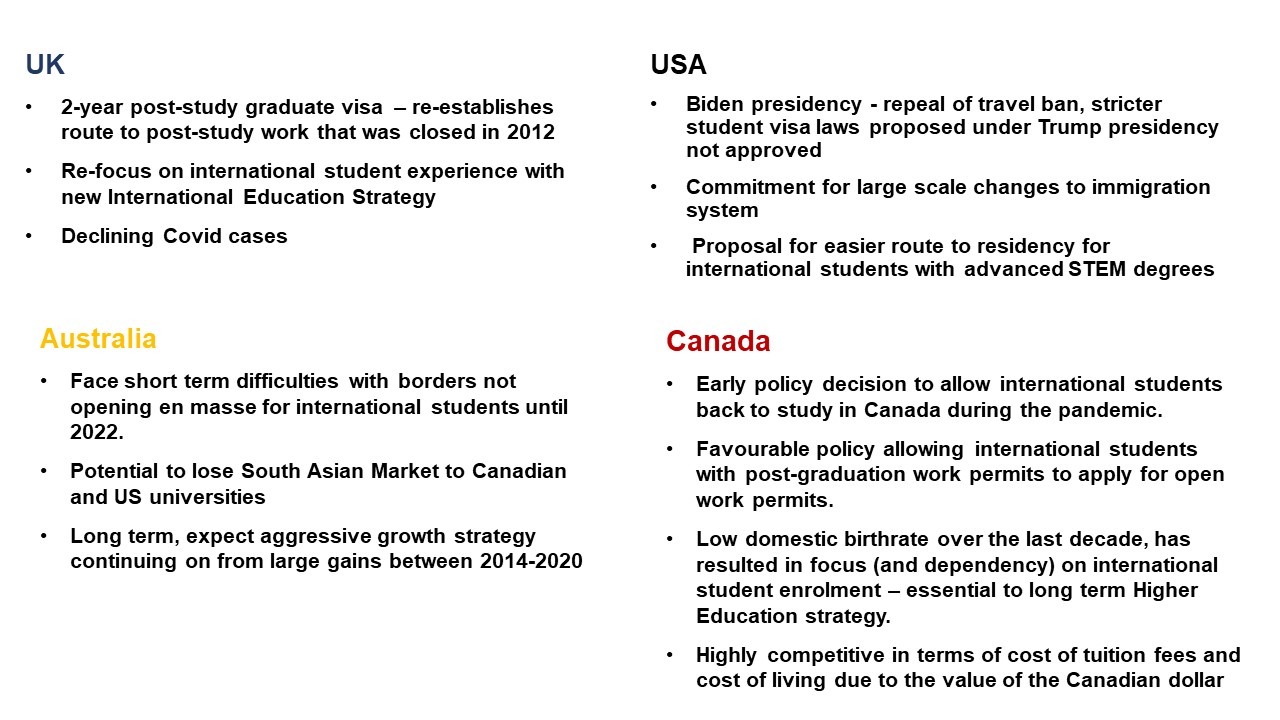 Time for some honesty. This article is about how the ‘big four’ countries in the international student mobility market are primed for big pushes in a recovering / post-Covid world. The truth is that ‘the big four’ sounds a lot better than ‘the big three plus a flagging Australia’. With universities in Australia not opening their campuses to students until 2022, it is likely that it will take many years for institutions to return to their pre-Covid level of international student enrolment. In the long term, Australia may not be able to recover its market share, considering the favourable socio-political situations the UK, US and Canada have currently. Given the huge growth Australia oversaw from 2014 up until the pandemic, it is hard not to envisage the country as a major player in international education in the future. However, of the current ‘big four’ they are at the greatest risk from European nations such as France, Germany, and the growing appeal of non-OECD countries.

As universities from at least three of the four major players start to look towards a more open and mobile future, it is vital that safety, the international student experience, value for money, and hybrid and flexible learning remain firmly on the agenda. Covid has changed international student mobility forever, and a return to pre-pandemic recruitment strategies are unlikely to be sufficient to meet the new and changing needs of the 2021 and 2022 cohorts.