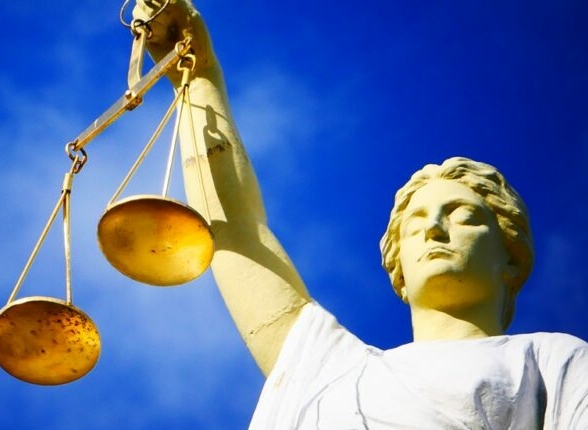 How do you evaluate a pilot in a field as complex as the judicial system?

It can be hard given practical limitations such as timings, location and budget, and the sensitive and complex nature of the work. Good evaluation can equally be affected by the need to delve into services without disrupting them. And that was before the pandemic…

We worked in partnership with Frontier Economics to tackle this question and more, in the evaluation of the Flexible Operating Hours (FOH) pilots, now published.

HM Courts and Tribunal Service (HMCTS) set up FOH to look at maximising the use of time in specific court and tribunal hearing rooms to support a more flexible, efficient and effective justice system. We set out to understand:

The FOH pilots involved afternoon and late sittings in courtrooms in Manchester and Brentford between 2nd September 2019 and 13th March 2020. In Manchester, the pilot was implemented by shifting the timing of the usual court sessions (i.e. those sessions taking place during usual hours), while in Brentford, pilot sessions were run in addition to business as usual sessions.

The evaluation aimed to assess the impacts of the FOH pilots across eight domains of interest:

To do so, ideally the pilots could randomly assign users to FOH sessions (‘treatment’ group) and usual sessions (‘control’ group) to rule out factors other than FOH causing any changes observed. And ideally, we would have comprehensive sources of evidence relevant to all the above domains of interest to explore the effects of the pilots across different audiences. But the real world of course throws up challenges, and the perfect solution is rarely feasible in practice. As evaluators, we’ve learned to welcome these challenges as opportunities to be creative!

Instead, we conducted analysis of operational, performance and cost data, comparing evidence collected during the pilots with evidence from before it launched. You may be thinking, “What does that even mean?!” Our partners, Frontier Economics, analysed:

We also interviewed court staff, legal professionals, judiciary and support agencies across the pilot’s operations, encouraging them to compare their views and experiences during the pilots with business as usual. It was fascinating seeing a picture gradually emerge from our interviews and visits to courts. 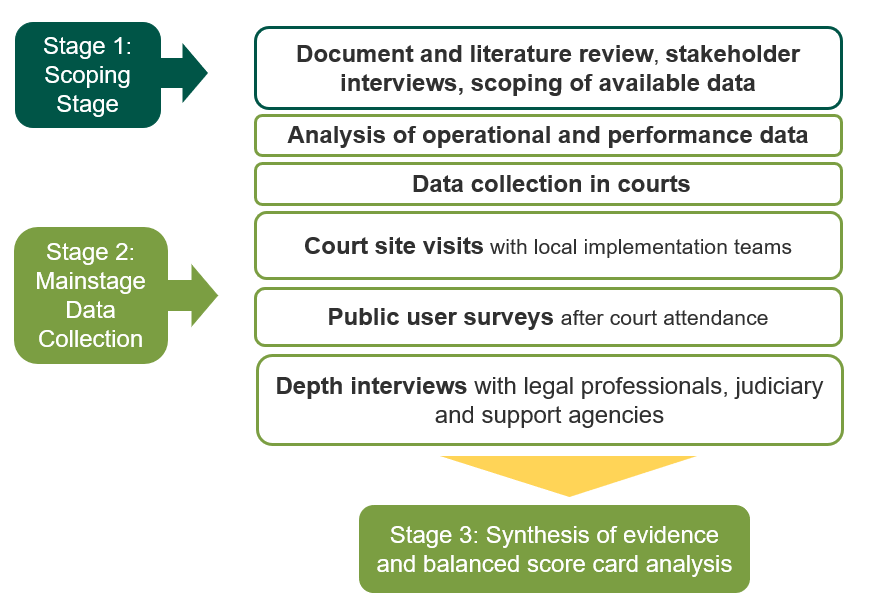 Each of these data sources were used to create performance indicators to assess the impact of the FOH pilots in each of the relevant domains of impact.

The FOH pilots appear to have had a broadly neutral effect on efficiency of court room use, for example, the FOH sessions were at least as efficient as the pre-pilot sessions. Given that FOH sessions do not appear any more or less efficient, on balance, than pre-pilot sessions, FOH could feasibly lead to increased productive court time, if FOH sessions are undertaken in addition to business as usual.

The FOH pilots appeared to have had an indicatively positive effect on accessibility of justice to citizens, with some evidence of reductions in time taken off work and improvements to perceived convenience of hearing times and travel to and from court. That said, some legal professionals, legal organisations and court staff raised concerns about FOH sessions being difficult to access for some public users, namely those with childcare responsibilities, those who are financially vulnerable or who do not live near the court.

Back to our initial question: How do you evaluate in a field as complex as the judicial system?

The short answer: methodically map what information is available or could be available to capture evidence on your intervention, expect the unexpected, and collaborate with all involved in the evaluation to work out what is practical, proportionate and adds value. And anticipate the time, attention to detail and skill required to combine multiple sources of information on the court cases of interest and details of the legal professionals and public users to produce a useable sample frame.