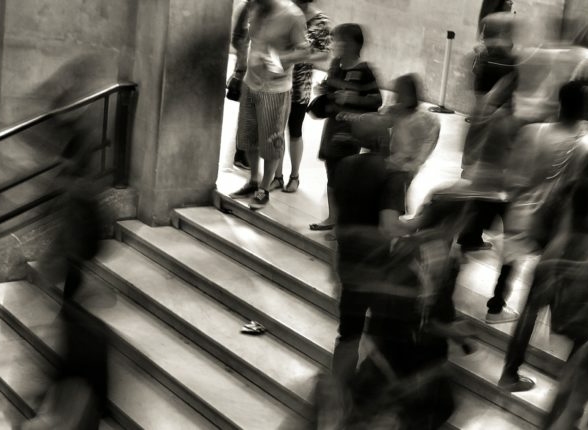 The government’s drive to kick start our flagging economy is evident, from Rishi Sunak’s July initiatives to a shift in messaging from ‘stay at home if you can’ to ‘go back to work if you can.’

So, as businesses re-open after months of lockdown and with the end of the furlough scheme looming, it felt an opportune time to test the temperature among businesses once more, with the third wave of our Coronavirus Business Survey.

Previously, the impact of the pandemic on businesses and staff was evident; yet, the perception of the government response remained largely positive. We were interested to learn if these new measures have been positively received, and the impact they are likely to have on the many businesses struggling to stay afloat.

The latest wave of our study, surveying 721 businesses, shows that:

In the following discussion we take a deep dive into these findings and discuss the likely impact of the pandemic and the government support measures on UK businesses.

The Plan for Jobs announced in Rishi Sunak’s summer statement on July 8th introduced a number of new initiatives to support the UK’s economic recovery, including: 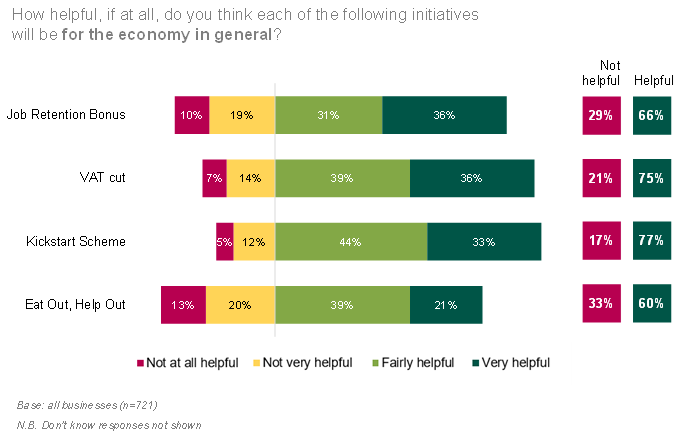 However, businesses were notably less positive when asked to consider how helpful each initiative would be for their own business.

While just over half (54%) believed the Job Retention Bonus would be helpful for their business, other initiatives were expected to have much less impact, particularly the cut in VAT and ‘Eat Out, Help Out’ schemes, rated as helpful by 29% and 23% of businesses respectively. However, these initiatives were clearly targeted largely at the hospitality industry, and as such 81% of businesses in the Hotels & Restaurants sector felt the VAT cut would be helpful for their business, along with 58% for the ‘Eat Out, Help Out’ scheme. 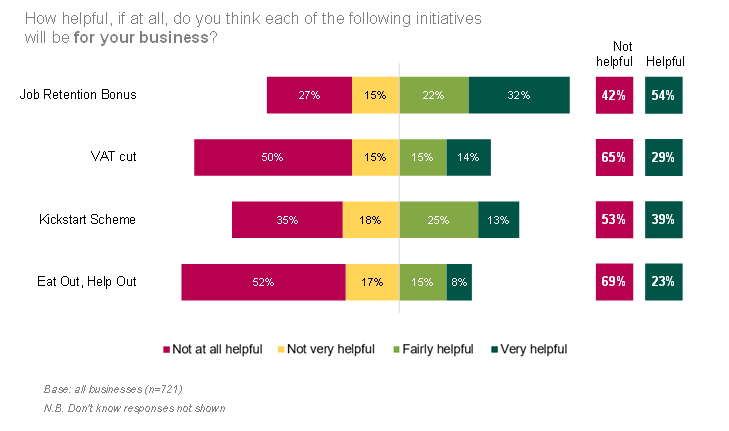 We asked businesses what help they would have liked to receive from the government, that was not included in the summer statement. Among all businesses:

The need for certain types of assistance was particularly strong in some sectors, with 70% of businesses in Health & Social Work saying they would have liked a cut in employer NI contributions, and almost half (46%) of those in Hotels & Restaurants wanting a continuation of the furlough scheme.

Overall, businesses continue to feel positively towards the support provided by government during the coronavirus crisis, with 70% either very or fairly satisfied. However, this does represent a drop in satisfaction since the previous wave of research in May 2020, when 75% were satisfied; while the proportion reporting they are very satisfied has fallen from 43% to 32%. 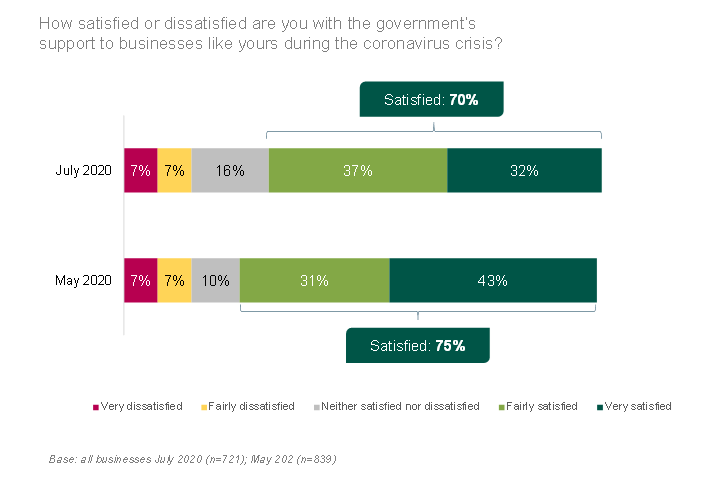 Expected use of the Coronavirus Job Retention Bonus

Although the retailer Primark recently made headlines by stating they would not claim the Job Retention Bonus, based on our survey just 7% of businesses anticipate bringing back furloughed staff without claiming the bonus.

Nearly three-quarters (74%) of those with furloughed staff stated that they will claim the Job Retention Bonus, if eligible. However, while broadly welcomed by businesses, it does not appear that the bonus will have much impact on the number of employees brought back from furlough.

Of those intending to claim the bonus, more than three-quarters (77%) said that it will not impact the number of staff they bring back. Just seven per cent said that it would be critical, while 13% said it would swing the balance. 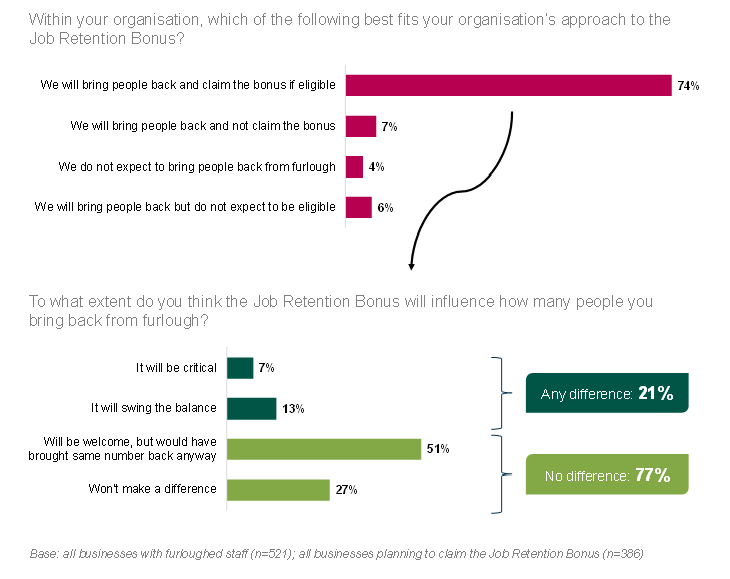 It does appear that the bonus may be slightly more effective in one of the sectors most hard hit by the lockdown, Hotels & Restaurants, where a fifth of businesses stated that the bonus will be critical in influencing how many people they bring back, and a further 12% stated it would swing the balance. However, this still leaves two-thirds (67%) stating that the bonus will not affect the number of employees brought back from furlough.

Plans for return to normal working

Two-fifths of businesses said they currently have staff working from home who would not usually be based at home. In light of the latest government advice that those who can go into work should do so, we asked businesses when they would expect their employees to return to their normal place of work.

Among all those who were planning a return to the normal place of work, the majority had taken or were considering a number of actions to facilitate this:

In most cases, businesses planning or taking any of these actions anticipated a cost for doing so, although small proportions said there would be no cost (2%) or even a cost saving (3%). 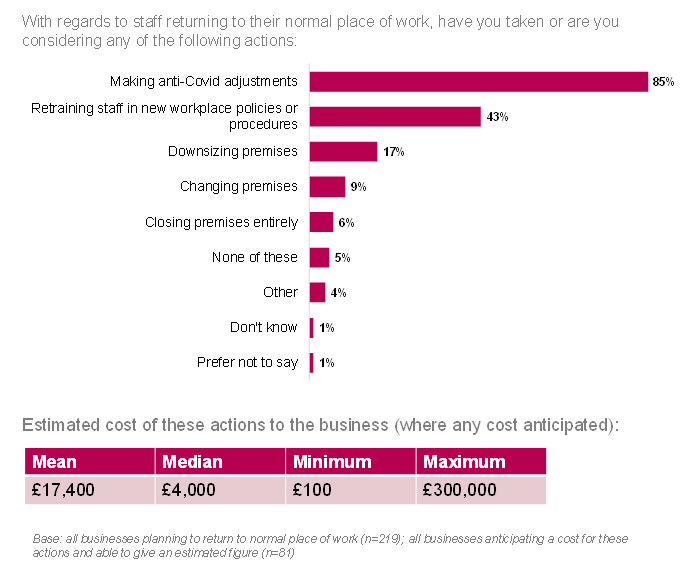 Adjusting to the effects of the pandemic and lockdown has forced UK businesses to rapidly innovate and instigate new ways of working. Although the circumstances surrounding these unprecedented changes have been painful for most businesses, 70% stated that they expect to retain at least some of these new ways of working in the future.

The top two changes businesses anticipate retaining are flexible working (37%) and increased home working (35%). In the latter case, businesses appear encouraged by their experience during lockdown, with nearly half (47%) of those whose staff were temporarily working from home saying it had not impacted their productivity, while a further fifth (21%) said that productivity had improved.

A third of businesses intend to carry forward the adoption of new technologies. This was particularly prevalent in Financial Services (55%), Health & Social Work (51%), Information & Communications (47%) and Business Services (43%).

Similarly, just under a fifth of all businesses (17%) had made product or service innovations as a result of the pandemic that they anticipated carrying forwards. This was most common in Arts & Other Services (29%), Health & Social Care (28%), and Hotels & Restaurants (28%). 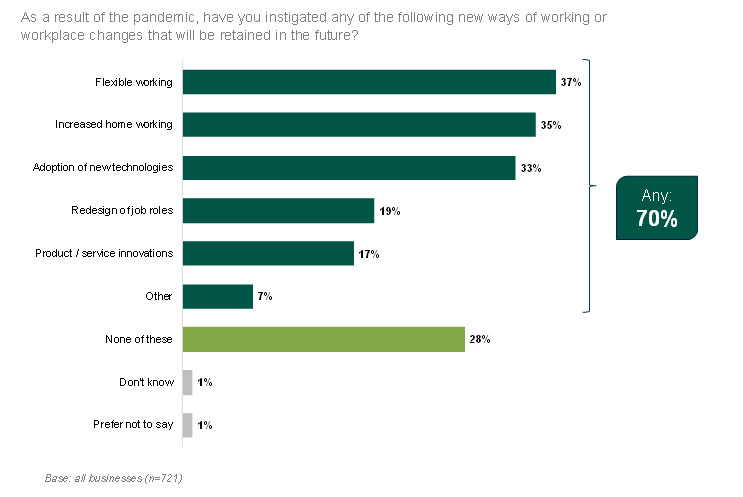 Overall, these findings reflect a level of scepticism about the impact the latest government measures will have on businesses. And while few businesses can likely afford to turn down the latest government support to keep their business afloat – few believe the Job Retention Bonus will play a factor in their decision on whether to retain furloughed staff, once the scheme ends.

That said, although it has waned a little since May, satisfaction with the government support for businesses remains high. With some tough months ahead for businesses, including the looming end to the furlough scheme, it remains to be seen whether the government can retain this positive perception.